Citizens from Uniontown Alabama were denied permission by the Alabama Environmental Management Commission to address environmental injustice and threats to their health and welfare last week resulting from operations of the Arrowhead Landfill just outside of Uniontown, according to a joint press release from Black Belt Citizens Fighting for Health and Justice and the Alabama Department of Environmental Management Reform Coalition. 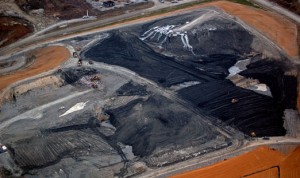 A close view of the growing coal ash mountain in Perry County, Alabama

The commission, which oversees the Alabama Department of Environmental Management, the state agency responsible for enforcing the permit for the landfill, refused to hear from environmental attorney David Ludder on the failure to properly consider civil rights issues in its permitting process that could put all federal funds it receives in jeopardy.

The Black Belt Citizens Fighting for Health and Justice, a nonprofit organization from Uniontown, was to present on August 16 the results from testing water samples taken by Samford University faculty from Arrowhead Landfill run-off and from a private well located on property adjacent to the landfill. The tests revealed elevated levels of arsenic and conductivity. Arsenic leaching from coal ash and coal ash dust is a known risk agent for cancer.

The landfill has been a site of controversy since toxic coal ash residue from the holding pond failure at TVA’s power plant in Kingston Tennessee was transported to Uniontown in 2009 and 2010 for disposal, a story we covered more in depth than any news organization in the country.

“A dozen citizens made the trip to support the planned request that the EMC instruct ADEM to take enforcement action against the Arrowhead Landfill to prevent more toxic contaminants from migrating from the residue,” the release says. “They want ADEM to exercise supervision and oversight of the landfill’s plan for remediation of the toxic discharge.”

While the EMC did not technically disapprove the Black Belt Citizens group’s request to speak, the board voted to postpone the subject until after the Environmental Protection Agency (EPA) concludes its investigation into charges that ADEM violated EPA requirements to protect the civil rights of citizens.

“It could be months or years before the civil rights claims are resolved by EPA,” the groups say. “The EMC’s decision effectively denied the Uniontown group the opportunity to voice their concerns regarding immediate health threats.”

The Black Belt Citizens also wanted to ask that ADEM support finding an alternative site for a spray field for the Uniontown Wastewater Treatment Plant which is currently proposed for a site off Perry County Road 53.

“This site is considered unsuitable because of its high water table and proximity to residences and streams,” they say. “Also, the soil types on the property have severe limitations for land application of wastewater because they will not percolate properly.”

The EMC also disapproved the request of environmental attorney David A. Ludder, who proposed to make a presentation on EPA’s civil rights requirements and ADEM’s failure to implement those requirements. Ludder’s planned presentation can be seen online here.

“EMC Chairman H. Lanier Brown, II, a Birmingham attorney, claimed that the planned presentation concerned a matter that is the subject of a complaint being reviewed by EPA,” Ludder said. “Anyone can look at the presentation and see that it was not about any specific site or complaint.”

The Perry County group expected to be heard because the EMC Chairman Brown had previously indicated his approval and in the past the full commission has followed the recommendation of the chair. In neither instance did the commission have a valid reason under its own rules for disapproving the presentations.

“This is a major step backward in one of the few areas where the ADEM Reform Coalition has seen progress by ADEM,” said Casi Callaway, Mobile Baykeeper and co-chair of the coalition, a statewide environmental group that has filed a petition with the EPA to remove ADEM’s permitting authority.

“ARC has worked for 12 years to establish better communication between ADEM and citizens,” Callaway said. “For the EMC to disapprove the request after citizens traveled at their own expense to make the presentation, only to be denied their voice before a public entity, is not only shocking but unacceptable.”

In response, the coalition boycotted a meeting with ADEM’s director and staff scheduled to follow the commission meeting.